Teaching requires the ability to clearly convey complex ideas. I try to balance theory with real world examples and interactive learning. I believe that applying fundamental concepts through hands-on experience can help to clarify aspects that may seem very complicated, at first glance. Because most classes are taught in a vertical learning style, in which new concepts build on previous ones, I believe that continual emphasizing and reinforcing of basic theories are critical to continued understanding of the course material. This is a lesson I learned from the most effective classes I have taken, and a technique I employ in my classes.

I am working on two new methods for enhancing engineering education: 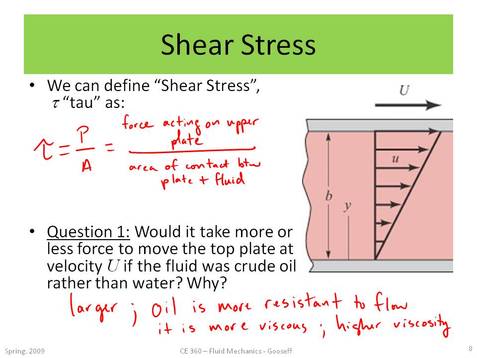 Guided Notes - In all of my current classes I use guided notes to assist students with note-taking, make my lectures more efficient.  I generate complete powerpoint lectures for myself, and then I remove several key parts and provide the 'incomplete' versions of the lectures for the students online.  I then use a tablet PC to lecture and fill in the notes during class.
Advantages I have found:

Scaffold & Fade Problem Sets - For the last 5 years I have been developing several sets of problems in Fluid Mechanics that use 'scaffold and fade' techniques.  Our 'modules' consist of a single video that includes a narrative and problem solving exercise.  We follow that with 3 problems delivered to students through our course management system.  The first of these 3 problems is similar to the example one in the video, and the second and third problems are progressively more difficult.  For all problems, we ask several questions related to solving the problem (e.g., at what points would it be most advantageous to apply Bernoulli's equation, etc.).  For problems 1 and 2, we provide the students with links to parts of the video that are pertinent to the question at hand.  This is the scaffolding or support for the student's learning.  The third problem has no links provided (i.e., we have 'faded' the support).  By the third problem, students will hopefully have learned enough to solve the problem on their own.
Classes Taught at University of Colorado:
Classes Taught at Colorado State University:
Classes Taught at Penn State: Classes Taught at Colorado School of Mines: Classes Taught at Utah State University: